On initial inspection, the Basin had several major issues.

These are the elements that composed our rectification strategy:

Spray weeds or remove them by hand.

Use forestry mulcher to create maintenance access down the batter to the bio-retention basin. This will involve:

The downstream end of the bio-retention basin has a wall of gabions, through which the under drainage has been placed. The gabions form the end of the bio-retention and a bentonite liner has been installed between the filter media and gabion. The design is poor and has resulted in the washout of the filter media through the gabions and the creation of a number of large holes.

Create a barrier upstream of the outlet gabions. A range of options is available with the potential cheapest solution as per below. The final solution to be resolved with Programmed Facility Management.

Excavate the area upstream of the gabions for a distance of 2m. Excavation to an extent 500mm into in-situ soils below filter media. Care to preserve under drainage pipes.

Line the upstream surface of the fill material with Geofabric (Bidim A24) and install bio-retention drainage layer, transition layer and filter media and compact.

Erosion around ends of gabion weir

Repair scour at ends of gabion weir and place rock scour protection (100-230m rock mattress) to up batter to tie in with existing levels. Extend gabion wall to solid embankment then add additional gabion basket on top of the existing wall each end to control and divert water to center of the overflow of the gabion wall. Compact additional clay on the embankment, place Geofabric (Bidim A24) and rock guard with 100- 230mm rock mattress to surface to protect embankment. 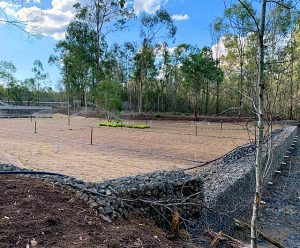 Following extensive storm damage in rain events in early 2020, there were large washouts in the basins drainage media that occurred, requiring the removal of all existing vegetation and the importing of 100 cubic meters of filter media to repair the basin.

We then undertook, mulching, jute netting, and re-planting  of the basin in accordance with the Construction and Establishment Guidelines for Vegetation Stormwater Systems including use of fertiliser and water crystals in planting holes Planting numbers based on plant 50% of an area of 1700 m2

The installation of temporary irrigation from the site irrigation system or directly from the pond. At the end of 3 months, a review will be undertaken to consider whether any further establishment is required. The bio-retention will need to achieve the requirements (i.e. plant coverage, maturity) outlined by the measured of success in the Construction and Establishment Guidelines for Vegetation Stormwater Systems

Flush all under drainage pipes to ensure they are clean and draining.

Chat with our experts today!

Or have us call you back